After the Lou Farish tribute show, I was looking at some of the guests' work, and came across several references by Curt Sutherly in his UFO Mysteries: A Reporter Seeks the Truth to a magazine by Gene Steinberg:

Caveat Emptor was first published by Gene Steinberg in autumn 1971, and ran fifteen issues before being discontinued. The magazine was resurrected in late 1988 for an eight-issue run — until the fall of 1990
Click to expand...

I see that there were some innovative articles and interviews with some mighty interesting figures such as Richard Shaver and Ray Palmer. So Gene, when are you going to make these gems available again?

Staff member
Good question. The publication was managed be me and my first wife, Geneva. Even though we had since split up, she returned for our sequel run.

As to whether I'll republish anything, that depends. Maybe I'll engage in a deep scanning session and get some of the stuff in PDF form. Obviously the original digital files (for the second run) have been unavailable for years.

Gene, while you're dusting off old pieces, see if you can locate this piece mentioned by Robert Barrow,
your interview of Dr. J. Allen Hynek from the Feb. 1977 issue of Official UFO. 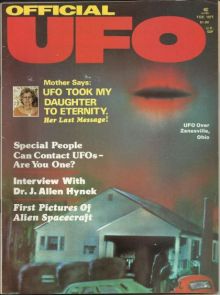 Staff member
I don't want to make a huge deal of this, but I do not know if I even have a copy around here. I'd love to have one.

I love it! 'UFO took my daughter to Eternity' and the other headlines are even greater. Thanks for sharing, Sentry.

Staff member
Yes, Sentry. I agree with Dyingsun and I wonder do you have any other little gems like above?

I absolutely love such pulications - there are always articles about stuff you would never otherwise hear of!

Will this lead to the Offical Paracast magazine? Think about it Gene...

Staff member
I don't know that I want to do that again in a world where being online is everything. Obviously, I can update the original CE format and such, but I don't know if we'd get enough subscribers and advertisers to make it worth the time and effort. It has to be considered that way to justify the project.

Sentry said:
Gene, while you're dusting off old pieces, see if you can locate this piece mentioned by Robert Barrow,
your interview of Dr. J. Allen Hynek from the Feb. 1977 issue of Official UFO.


That is a very cool cover!

I was thinking more of an online publication. With the hosts and friends of the show and possible guests it could be something good indeed. Heck you could even use some of the talent pool with the mods and members here.

Staff member
OK, I talked with the co-editor for Caveat Emptor, and we are going to work on some sort of collection to be published in book form. But I don't have a copy of issue #6, so if anyone does, maybe I can borrow it or get a scan?

Staff member
Can you explain the title 'Caveat Emptor' Gene? I may be dumb and ill-informed - I don't know if it's an in joke or what?

Staff member
Stands for "let the buyer beware." And when we were asked why, we said, at the time, why not?

I love these magazines from the 70's!!! It was a no holds barred kinda anything goes time.
Here's another cover I found...
UFOPOP: Flying Saucers in popular Culture - Magazines

Staff member
Just FYI: I've been in touch with Geneva and we've decided to go ahead and digitize the content of these magazines. Once again, I'm missing issue 6. Disappeared somewhere in the many moves over the last 40 years, and I'm hoping someone out there can get me a copy (or a scan).

The goal is to make a book, probably two volumes, which will contain all the great articles we ran over the years, including, in the first issue, my interview with controversial UFO editor Ray Palmer. We featured articles from Jim Moseley, Allen Greenfield, Curt Sutherly and lots and lots of others.

Reading the old material has been refreshing. The writing isn't as bad as I expected, and I found that Geneva and I actually had a minor UFO sighting of some sort. I had no memory of such an event. It must have happened in 1970, give or take a year, but the details were limited to a couple of sentences in an editorial and nothing more. Curious what else I've forgotten, or maybe I should be glad I don't remember.

Considering all the times I've heard you bemoan the fact you haven't seen a UFO - I am shocked at this little revelation (and alas, I am like you Gene - not a hint of a UFO, though there was a great sighting 40miles away last week -grrrr

As for digitizing the magazine - fantastic idea and I am looking forward to seeing all that stuff. It would be a crying shame to let disappear into history forgotten. LIKE LIKE LIKE

Staff member
The sighting was really nothing special, beyond a pinpoint light in the sky, making a swift turn (possibly) and vanishing. Could have been most anything, I suppose, so no wonder I didn't remember it. It's barely an entry for the gray basket.

If we do a treatment of the magazine, it would probably be a best of collection, since some material probably wouldn't be of much interest anymore. But we have interviews with Richard Shaver, Ray Palmer, Tim Beckley, Yonah Fortner (forgotten ancient astronaut pioneer), Curtis and Mary Fuller (co-founders of Fate with Ray Palmer), and articles from Moseley, John Keel, Allen Greenfield, Curt Sutherly, and a whole lot of other stuff, including some wacky satire and some great research pieces from the late Floyd Murray. He was a brilliant man, but died in relative obscurity a few years ago.

Staff member
All right, here's a sample from the first issue of Caveat Emptor.

In 1965, I was one of the rare people to have had a personal interview with Ray Palmer, the pioneer UFO researcher and promoter of the Shaver mystery. Jim Moseley drove several of us to Amherst, Wisconsin, Palmer's home. The crew also included, near as I can recall, veteran researchers Allen Greenfield and Rick Hilberg.

My question/his answer. Tell me that everything he says isn't still true?

PALMER: No!…We’ve been in this thing now since—well, I’ve been in it since ’43. Actually, the flying saucer saga as it’s understood today began in ’47 with Kenneth Arnold’s sighting.

Now we’ve been in it this long, and what have we arrived at? We don’t know anything more today than we did when we started. Nothing we can prove. And I would think it would be a scientific assumption to assume that now, ater all these years of effort, we’re going to come up in the future with exactly the same thing. Why should it change? Are we going to have a terrific revelation that’s going to solve this all for us? I don’t think so.

Staff member
Cool Gene. More when you can please.