Staff member
Thanks. We're still working out the form in which it'll appear, so I may not have much more content right away, but I'll give you some hints as to what we have going forward until we know how best to present it.

Gene Steinberg said:
Just FYI: I've been in touch with Geneva and we've decided to go ahead and digitize the content of these magazines. Once again, I'm missing issue 6. Disappeared somewhere in the many moves over the last 40 years, and I'm hoping someone out there can get me a copy (or a scan).

The goal is to make a book, probably two volumes,

Any progress on this?

As you may know, I have an interest in the digitising of UFO periodicals and other material, so wondered if you still plan on making a book (or making the digitised content available)?

I don't think I've ever read an article from Caveat Emptor so wondered if more detail on its content was available. The only discussion I can recall of this publication was in Curt Sutherly's book "UFO Mysteries" and in relation to an episode of the Paracast at the link below:
Richard Toronto and Geneva Hagen | The Paracast Community Forums

Are you still missing "issue 6" or have you found a copy since your post above? If you still need it, are you referring to the issue published in September/October 1972?

Here's a sample cover for Caveat Emptor by the way: 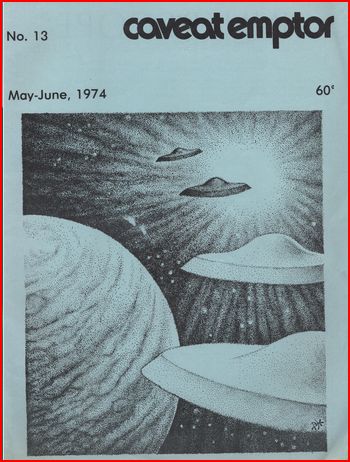 Staff member
After a bit of a lapse, we're moving forward again. The plan is to put the best material into book form. I'll let you know what issues I still need and how it's progressing. Certainly our Ray Palmer interview will be front and center.

No problem - just give me a shout here or by email. My email address is my username at gmail.com.

IsaacKoi said:
No problem - just give me a shout here or by email. My email address is my username at gmail.com.
Click to expand...

Isaac,
Literally, you are one of the ufological people that I am most thankful for today! Ok, so the Pilgrims were not talking UFOs at the diner table, so what? We all have our own reasons top be thankful.

In my mind, via the course of the last 2-4 weeks, this is the run down.

1. Sentry reveals as of yet unrealized perspective contained in newly published information on the Cash/Landrum case.
2. Ed Fouche is out.
3. Sentry Reveals via Jan Harzan's Mufon publication that taking ET home via ESP was a in fact a joke never meant to be taken seriously. We await conclusive confirmation of as much via yourself MR. Koi. This piece of information is more pivotal than Fouche's revelations, which BTW, I have not seen any refutation of the man's credentials yet. Something that I always unfortunately placed a good deal of stock within, as the guy had military records up the yen yang. Thinking that they had in fact been heavily scrutinized as those supporting the fraud (Ed Fouche) had claimed to have done, was my mistake. What was this, 15 or so years ago now via the initial speech Ed made at, what was it Isaac, a ufo congress or some such profundity? Those are the people whose feet need to be held to the fires of accountability. *If* in fact he was just a lying drunk and not an informational plant. If he was an official plant, certainly one would expect his credentials to be legitimate as they would be issued via the control of the very agency inspiring the subterfuge.
4. Via the incredible, and honestly dude, totally cool, humble, and thoroughly unselfish act of sharing the Connors information as you have, Isaac Koi, and that other awesome guy whose name I do not know off the top of my head, you have been inducted into the hall of total cool in my book. Seriously man, we all owe you HUGE. There is so much priceless information in those audio files. I can't tell you how many wonderful hours have already passed listening to people I never dreamed I would get the opportunity to in actuality hear. THANKS!!! (and YES of course, thanks to Wendy's powerful and precious efforts themselves)
5. Gene confirms that a CE compilation is still actively in the works. IMO, this makes for one tasty icing on a cake whose ingredients may consist of some salty disappointment, but one who's exacting make up will more than wash in terms of total productive new paradigms in the ongoing perspective UFO consideration.

In other words, thank you Isaac, Curtis, and Gene, for offerings that make the UFO consideration a far richer, and more so expansively intriguing matter, rather than one that might be swallowed up due to the typical alarmist inflated value of the aforementioned salty ingredients. Perspective is always so relative. Peace/Be Well!

Gene Steinberg said:
After a bit of a lapse, we're moving forward again.
Click to expand...

Just to let you know Gene, as part of my tying up loose ends, I remain willing to sort out getting "Caveat Emptor" scanned and made freely available online as searchable PDFs. It is, of course. up to you and Geneva.

Staff member
Believe it or not I don't think I have all of them. But I'll check. I'm in unpack mode and it may take a few weeks.

I had hoped, however, to possibly put these in a book, but I suspect they don't have much sales value. So, yeah, I think we can work out something. Thanks for offering.

Gene Steinberg said:
Believe it or not I don't think I have all of them. But I'll check. I'm in unpack mode and it may take a few weeks.
Click to expand...

If you are okay for me to arrange for them to be made freely available online, you don't need to find your own copies - I just need your permission.

I can sort out scanning of almost all issues by - probably - the AFU in Sweden (as long as you are happy that the AFU makes them freely available on the AFU's website) and then fill in any gaps.
C

Gene Steinberg said:
In 1965, I was one of the rare people to have had a personal interview with Ray Palmer, the pioneer UFO researcher and promoter of the Shaver mystery. Jim Moseley drove several of us to Amherst, Wisconsin, Palmer's home. The crew also included, near as I can recall, veteran researchers Allen Greenfield and Rick Hilberg.

My question/his answer. Tell me that everything he says isn't still true?

PALMER: No!…We’ve been in this thing now since—well, I’ve been in it since ’43. Actually, the flying saucer saga as it’s understood today began in ’47 with Kenneth Arnold’s sighting.
Click to expand...

Gene, do you recall where Palmer was located in 1943, or any specifics about his first experiences re ufos during that year? Thanks.

Staff member
Not offhand. If I did it was long ago.
C

Thanks anyway. From material I've read, I think that the 1943 ufo sightings over the Hanford Atomic Plant were among the earliest, and I know from at least one individual's testimony that pilots were sent in pursuit of them there. Just thought that Palmer might have lived in that area at the time.

I'm now almost ready to submit a batch of material for scanning next week - which I do every 6 months or so.

I could include "Caveat Emptor" in this batch.

I think I can get all, or all but one, of the issues done.

Staff member
We discussed it. There really isn’t enough justification for a book compilation right now.

So go for it but include our original copyright notices please. Thanks.

Gene Steinberg said:
go for it but include our original copyright notices please. Thanks.
Click to expand...

I'll get back to you once the scanning is done, hopefully next week (or possibly the week after).

Staff member
Here's the link to the full set. Really good scans, by the way. Thanks Issac.

Staff member
Happy to answer any questions about Caveat Emptor. I'll see if Geneva has the time to pop in too.

It's a real treat to have these available. There's some fascinating historical material, yet some of it seems fresher than today's UFO news and discussions.
One thing I particularly enjoyed seeing was the 1988 Jim Moseley interview. Despite his legitimate contributions, Jim had the reputation of being "the Court Jester of Ufology." Interviewer Gene Steinberg asked him about the prankster/serious dichotomy. 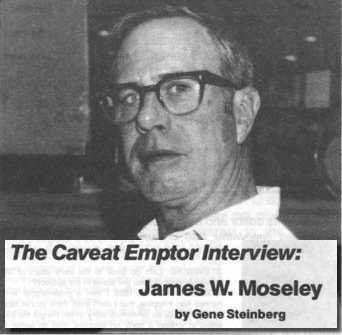 Jim replied ,"Yes, well that's what I have a hard time getting across to people. I do have a serious interest in the subject, and I did have a serious interest even back when I was doing hoaxes, but my approach is not serious. I like to enjoy myself. It's a hobby too. But, underneath it all, yes I am serious, and I think I always have been and I will continue to be."
Caveat Emptor Winter 1988 -1989

This is great! Thanks Gene and Isaac!

Hi Gene (and anyone else who might have information). I can't for the life of my remember where I heard this, but I think that you were connected with a zine back in the day called "Crossroads" or something similar? I think it was UFO related but also got into some other weird stuff. Is that true? If so, any of those zines floating around?

(by the way, you knew a lot of the seminal people in the UFO scene back then--did you hang out with any discordians, guys like Thornley or Hill?)