No, I just picked that up from his home page.

The tall white lies of ufology are quite fascinating as this thread proves. You can see how ufology writes its own history with active participants. Obviously Charles either believes he's had experiences or he's adding spice to his retirement years by selling a myth. I can see how one could get spooked by a bunch of Big Horned Sheep standing around near the water guzzlers that look like spaceships. And maybe a lonely incident that turned into a hallucinatory moment of fear blossomed into a tale of aliens living out an anomalous culture in the desert.....

But of even more interest to me is how his story gets investigated and how the possibility of myth is written into the goings on construction companies hired to build for the military in the desert. Those videos trained posted demonstrate how active and eager intelligences get pulled into the lure of Google maps and FOIA requests that then lead to new zones of nebulous possibilities. Ufology just lends itself to this kind of extrapolation. You can see how fiction, mischief and speculation can create new UFO 'facts'.

Tall Whites repeat across the whole of Ufology. Then there's small whites, so often white or grey.

David Bowie walks tall and white across his desert home world only to land on earth, hoping to make enough money off of his inventions to bring water back to his home world. So often the Tall Whites seem to be primarily concerned with setting up habitation here on earth. Poor David Bowie ends up a blind alcoholic, never to return home again...that's what happens to tall white aliens who try to run things. 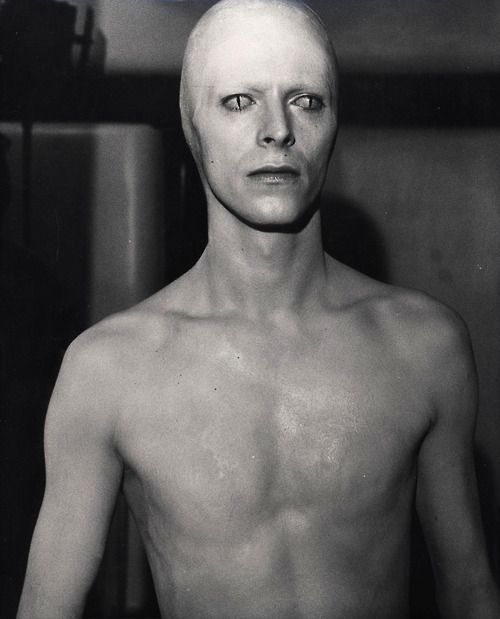 The movie version of The Man Who Fell To Earth brings together two great electric artists, Nicolas Roeg and Bowie and the result is very satisfying.
Invention is the Mother of Ruin: The Man Who Fell to Earth | Tor.com
‘The Man Who Fell to Earth’ Is a Classic Twice over—as a Movie and a Novel - The Daily Beast
The novel on the other hand is an even sadder polemic and very well written. If you don't know this novel of tragic alien visitation then it's about time you get a copy. It reads well, and lingers nicely on art pieces at the start of each chapter. It's probably a much more realistic approach to how things would unfold in light of a Renaissance man alien landing in the middle of a capitalist era earth.

Staff member
I never believed in this story, having heard him first on The Kevin Smith Show years back. A great yarn sure but for real? No!

I have completed Mr. Hall's first book and to be quite frank, I was quite disappointed. In my personal opinion, Mr Hall, alongside David Icke, Steven Greer and many others creative-hoaxers are solely focused toward misleading the general public in order to profit immensely from book sales and paid presentations – this is achieved by creating a product that fascinates humans most desired questions; what’s the meaning of life? are we alone in this universe? etc. To no surprise, religious texts sell well too. If Jesus were alive today, he could make a fortune traveling the world charging credulous attendees conferences tickets –selling those false hopes. Unfortunately, we live in a world with Hoaxers, liars, deceivers, greed and arrogance. Mr Hall should do the right thing and inform his followers of the truth that his books result to nothing more than science-fiction, so those poor souls can continue their life in peace. He should relabel his book to science fiction as it was before – which naturally resulted to less sales. Do you honestly think the US Government would use a ‘Second Class Private weather balloon buffoon to be Earths’ Extra-terrestrial Ambassador? Thats equivalent to asking a McDonalds burgers flipper to Engineer a Space Rocket to Mars. Mr Hall certainly gives himself 'a lot of' appraise ‘to himself’ constantly in his book, which only makes you cringe further at his arrogance and ego, he’s certainly not the modest man he so thinks, inface he is insane. His book is riddled with spelling and grammatical errors, jumping stories, contradicting statements on a regular basis. Very few people can back up his claims, there is no supporting evidence to the alleged 'Tall White Aliens'. Maybe the intense heat at the desert had caused him hallucinations, and to make up stories to pass time. People are unable to recognize a nut case when s/he is right in front of them, bizare, what has the world come to.
Last edited: Apr 8, 2017
A

However, the eyewitness accounts of so called human looking able to move and walk oddly (glide along) compared to everyday joe blogs from odd UFO encounters more theatre from unkowns. More smaller than so called "tall white" and cloaked/ hooded type figures also seen by eyewitness. In the end all still unkown and agree with tall whites just a story.
H

RadarRyder said:
So I may get rapped in the mouth for this....but has anyone ever been able to verify Dr.(?) Charles Hall was ever in the U.S. Airforce or any part of the U.S. Military. Maybe it's just me but the guy just sounds "hoakie".

P.S.-Is this the guy, I think Don Ecker, asked to produce his DD214 and never heard from the guy again????
Click to expand...