List of Technical Papers Related to UFOs and Electro Magnetism

DR. NING Li AND DOUGLAS TORR: GRAVITOMAGNETIC FIELD WITH SUPERCONDUCTORS
a rare interview
In the 1980s, Ning-Li – a world renowned scientist predicted that if a time-varying magnetic field were applied to superconductor ions trapped in a lattice structure, the ions would absorb enormous amounts of energy. Confined in the lattice, the ions would begin to rapidly spin, causing each to create a minuscule gravitational field.It wouldn’t actually be an anti-gravity machine’ it would, however, be exerting an attractive or repulsive force on all matter and would therefore be pretty close to an impossible machine. Dr Ning Li, working in UAH’s Centre for Space Plasma and Aeronomic Research has recently been working at UAH on an ‘artificial’ gravitational field made inside a container made of superconducting material. 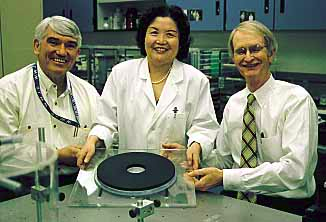 From left to right Dr. Campbell, Dr Ning Li and Larry Smalley at
University of Alabama at Huntsville laboratory.​
That was over a decade ago. Now, the head scientist, Dr. Ning Li, (lady in the middle) has apparently disappeared a few years ago. According to this article she is now working for DOD.
Bose-Einstein and Anti-Gravity
Last edited: May 22, 2019

For those familiar with General Theory of Relativity, this is one of the most significant UFO videos ever. This video shows white light bellow the UFO changing colors: red > yellow > blue >> red > yellow > blue. In terms of GTR that would mean that UFO is alternatively squeezing and stretching the spacetime bellow itself in order to keep hovering. Red and yellow shifts are normal, every large objects creates red or yellow gravitational light shift. But blue light shift doesn't exist in nature and is completely artificial.

Have you read "The Hunt for Zero Point" By Nick Cook?

Here is a good resource;

The recent interview with Eugene Podkletnov's (2019) is a good update.

TDSR said:
Have you read "The Hunt for Zero Point" By Nick Cook?

Here is a good resource;

The recent interview with Eugene Podkletnov's (2019) is a good update.

That's not 2019 interview with Podklenov, but an much older interview, possibly from 90's. AA simply upgraded the theme of their WordPress site and when that happened all the dates on all the posts were changed into a date of theme update.
You must log in or register to reply here.