Staff member
[Looking at the two Apache-run "Dulce" Conferences, 2016-2017, and the list of presenters, the Jicarilla could easily be described as 'the wild west' in the land of paranormal reports, myths, legends, tall tales and subterrainian claims based in deception and fear... —chris] 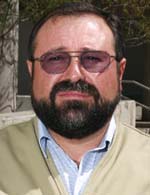 Today, June 13, 2017 marks the 41st anniversary of the first livestock mutilationwe experienced on our ranch in and around Dulce, New Mexico.

This is the day that changed not only my life, but that of my family as well.

We did not choose to enter into this evil phenomena as those who have chosen to do so, in most cases profiting, without assuming risk of any kind.

We were brought into this dilemma by direct criminal loss of our livestock.

In the subsequent years from 1976 to 1985, dad and I lost 20 lactating beef cows, their calves, two yearling bulls and a yearling filly to these mutilators.

Since we were doing business with my grandfather, replacement of the cattle was imminent.

In addition, we lost 19 two-year old pregnant heifers that suddenly just died over a two week period after the Jicarilla Tribal Police spotted an unidentified (military?) aircraft hovering over our herd on April 8, 1982.

Lab reports were inconclusive and only indicated the presence of an unknown strain of Bacillus sp. (a possible cousin to anthrax?).

Over the years, many law enforcement personnel as well as self-proclaimed animal mutilation experts have claimed to have solved the case.

To date, not one has moved forward with a criminal investigation case to prosecute the domestic terrorists that have plagued our family and the many other ranchers and farmers in the US who have fallen victim to these cowards.

Many of these individuals, who have taken the oath “to protect and serve”, have only profited from our misfortune and have downplayed the severe financial losses and emotional strain we have endured over these past 41 years, as well as our civil rights being violated in unspeakable ways.

We have become “the victims” of domestic terrorism and continue to do so! [sic] REST OF ARTICLE HERE

I find this comment in the article a bit odd.

Here are some very important points noted by Greg Valdez, author of ‘DULCE BASE‘ in regards to the cattle mutilations in Dulce, New Mexico, from the mid 1970s to the early 1990s:


“If the government went to local ranchers and purchased cattle to use for testing purposes, the first question any rancher would ask is, “Why are you testing my cattle?”.


And more importantly, “Who contaminated them?”


It would have caused a tremendous uproar in the surrounding communities.

If someone wanted to purchase my cattle for testing purposes, my assumption would be to test something on them, not to test the cattle themselves.
I suppose its a reasonable response given the nuke tests in the area.