I've come across a fascinating book that talks about high level spiritual things from a scientific perspective. This book is intriguing as it talks about many similar things to what people in mystical states mention such as seeing into parallel dimensions and interacting with beings from other worlds etc.

This book is called Zhuan Falun and it is from the Buddha Law School of Cultivation however it is not Buddhism the religion or Daoism the religion, it's something more profound. It seems to me to be more of a spiritual science as many of the terms and concepts in the book are talked about in a scientific down to earth manner instead of flowery mystical prose which I found very refreshing.

Now here is where it gets interesting, this book talks about the following things:

Microcosmic worlds - This concept was very far out but it talks about there being worlds within you, countless worlds. Similiar to our world with life , water, animals etc. An analogy is zooming an an atom within one of your cells and realizing at that level of magnification it is just like our solar system. Then zooming into a single particle in that world and finding out it too is a vast world, apparently the level it can go onwards like this is beyond imagination.

Supernatural Abilities - In the book they mention that everyone has them it is just that they have atrophied. It goes into depth about this topic. Some abilites that are mentioned are precognition, retrocognition and remote vision.

The 3rd Eye - Talks about how at the front part of our pineal gland there is a complete structure of an eye there. Modern science calls it a vestigial eye but in the cultivation world they say this eye just naturally exists like that and it can be activated allowing one to pierce through this dimension and see other dimensions. It talks about how there are many levels to this 3rd eye and it goes into great depth about it.

Thoughts - This part was amazing. It talks about how a human brain is just a processing plant. How the real you is actually your soul, it's like your whole body and brain is just a vehicle and that the true commands are issued by your master soul, but this master soul is very tiny and it can switch positions while inside you and it can also expand and shrink. It can move from your brain to your heart and to other parts of your body and it is 'he' who calls the shots. Your brain is just the factory which your master soul sends his cosmic commands to which then create the forms of expression and communication we use such as speech, gestures, etc.

These are just a few things that are covered but there are many many other things which blew my mind when I read it because of how it resonated with some of the mystical experiences people sometimes have, especially the multidimensional nature of reality and how all of them are hidden in our day to day perceptions of the world.

If this sounds interesting to anyone you can grab a copy of the book here:

Excellent post, Adamantius. You have a knack for presenting information in a way that invites the reader. I'm downloading the book. Thanks again, mate, and good luck on your quest.

Just to throw in my two cents - in case people don't know, this is Falun Gong, a contemporary, cultish version of qi gong practice. Generally speaking qi gong is a healthy practice of daily exercise that involves gentle body movements as well as meditative aspects. Qi or chi is often translated as air or energy and gong is work, so qigong is working on moving the energy around in your body. Internal martial arts like taiji also work with the same type of energy. The manifestation of some kind of supernatural abilities is often associated with dedicated practice of various kinds of meditative and energy arts. Then desire to manifest some kind of supernatural abilities comes along and ruins everything.

By all means check out the PDF download, but do some searching on the interesting history of Falun Gong as well.

Thankyou Pong, happy to have shared it with you. : )

Sue, I agree with you. Supernatural abilities do manifest when doing a high level Qi Gong practice but they should not be pursued or sought after as they are just byproducts of the Cultivation process. The real reason for cultivation in High Level QiGong is far more profound and it's all explained in Zhuan Falun.

Actually in terms of Supernatural Abilities and why one shouldn't seek them is explained in this excerpt from Zhuan Falun:

Abilities only come out when a person decides that he truly wants to cultivate, he can’t make them the goal of his cultivation. What do you want those things for? Your only goal is to use them around people, isn’t it? But there’s absolutely no way you’re allowed to just go and freely use them around ordinary people like that. That’s why the more you want them, the less likely you’ll get them. It’s because you are seeking, and needless to say, seeking things is an attachment, and it is exactly attachments that cultivation tries to get rid of.

There are a lot of people who’ve cultivated to high realms but who don’t have any abilities. Their masters have locked them, since they’re worried they won’t handle themselves well and will do bad things. So they don’t let them use their divine powers along the way. There’s a good number of people like that. Abilities are directed by a person’s mind. While a person is sleeping he might not be able to handle himself well, and maybe he’d dream something and then discover the next morning that everything was in total upheaval.

And that’s not allowed. Cultivation is done in the setting of ordinary people, so the people with great abilities usually aren’t allowed to use them, and most of them are locked, but it’s not absolute. There are a lot of people who’ve cultivated pretty well, and they can handle themselves well, so they’re allowed to use a portion of their abilities. If you ask someone like that to just go and show you some of his abilities, there’s no way he would. He’s able to handle those situations."

Just to let people know, a new version of the book has been released with an even more accurate translation from the original Chinese:

It's such a complex topic. How many more would suffer if China were thrown into utter poverty because nobody would do any business with them? I know the HDDs we buy are made in amazingly modern hi tech facilities where the workers seem to have relatively happy and productive lives. Plus they provide work for many others in other countries as a byproduct. I think we all know what really needs to happen, but it's way beyond my means to do anything about it, and this is more a paranormal forum than a political one anyway ( sigh ).

The core issue is the evil communist specter that has infected China, prior to Communism China had a glorious civilization with a deep and rich culture. Once people renounce their affiliation to this red demon things will change quickly. The tides are turning though, many people are now suing the evil wretch Jiang Zemin, the orchestrator of the persecution of Falun Dafa:

And the bigger news is that millions in China are awakening: 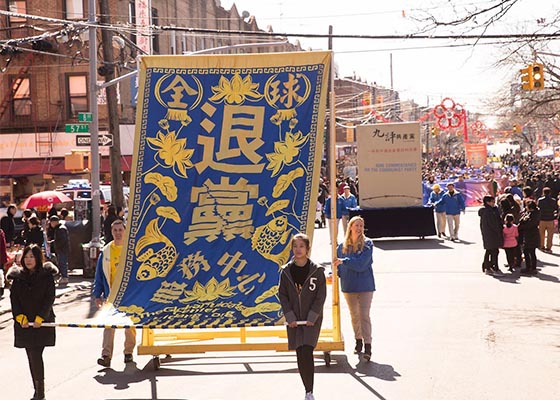 Adamantius said:
The core issue is the evil communist specter that has infected China, prior to Communism China had a glorious civilization with a deep and rich culture. Once people renounce their affiliation to this red demon things will change quickly. The tides are turning though, many people are now suing the evil wretch Jiang Zemin, the orchestrator of the persecution of Falun Dafa:

And the bigger news is that millions in China are awakening:

The extremes to which humanity is capable is not something I think any one person can truly fathom, least of all me, though I have tried.