Long-time Skeptical Author and Investigator Benjamin Radford Discusses Claims for Paranormal Encounters and Other Topics on The Paracast!

SUPPORT THE SHOW AND ENJOY A PREMIUM PARACAST EXPERIENCE AT A SPECIAL LOW PRICE! We have another radio show and we’d love for you listen to it. So for a low subscription fee, you will receive access to an exclusive podcast, After The Paracast, plus an enhanced version of The Paracast with the network ads removed, when you join The Paracast+. We also offer a special RSS feed for easy updates of the latest episodes on your device. Flash! For a limited time, you can save up to 40% on your subscription. Long-term susbcribers will receive a free coupon code for the James Fox UFO documentary "The Phenomenon," which includes 3 hours of extras, while supplies last. So act now! For the easiest signup ever, please visit: Choose Your Membership Upgrade

This Week's Episode: Gene and Randall discuss paranormal matters and other subjects with long-time skeptical writer/researcher Benjamin Radford, author of "Big-If True: Adventures in Oddity," a compendium of several dozen columns from Skeptical Inquirerscience magazine, where he is a deputy editor. The topics he explores include urban legends, the paranormal, the tale of an alleged walking tree, fake cures, critical thinking, media literacy and even whether a certain well-known online dating service uses scientific methods to screen it's applicants. The discussion also includes the possible efficacy of nutritional supplements and even Gene's personal experiences with one of these alleged remedies. Ben is also a member of the American Folklore Society, the British Columbia Scientific Cryptozoology Club, and the American College of Forensic Examiners International.

After The Paracast -- Available exclusively for Paracast+ subscribers on December 27: Skeptical researcher and writer Benjamin Radford continues the discussion that began on the December 27, 2020 episode of The Paracast. During this segment, Gene brings up a list of prominent people in government and military service who have made positive statements about UFO reality and the need to investigate the phenomenon. This leads to a debate about the meaning of such statements and whether these people were just being polite. Are government people being left in the dark about UFOs, what about developing critical thinking skills, and are schools teaching students to just behave in socially acceptable ways rather than learn facts? Ben is the author of "Big-If True: Adventures in Oddity," a compendium of several dozen columns from Skeptical Inquirer science magazine, where he is a deputy editor.

Former Government Officials and UFOs — What Aren’t They Telling Us?
By Gene Steinberg

I know some of you aren’t pleased with critics, and I sometimes feel your frustration. Some are outright jerks, others seem sincere enough but are overly quick to make up solutions to a UFO sighting or other paranormal event that skirt the details.

But others are totally sincere and friendly about what they do, so you are free to disagree without getting into a flamewar. One example is a long-time skeptical writer, Benjamin Radford, who over the years worked with James Randi and other professional disbelievers. While I may not agree with Ben on a number of matters, he’s an agreeable chap and appears amenable to being shown when he is wrong.

So on the December 27, 2020 episode of the After The Paracast podcast — an exclusive feature for Paracast+ subscribers at Choose Your Membership Upgrade — I referred to last week’s column in listing some of the prominent people, particularly those involved in the military and intelligence, who had positive things to say about UFOs.

Now one of his complaints was outright wrong, that none of the people mentioned in our newsletter made anything beyond general comments calling for serious UFO research.

As I told him, he was dead wrong, particularly in the case of Him Eshed, retired general and a former official in Israel’s Defense Ministry, who speaks of extraterrestrials from a “galactic federation” visiting us. The other telling comments come from a long-time Canadian politician, Paul Hellyer, who claims the UFOnauts are here as the result of our infatuation with nuclear weapons that began in World War II.

Just before we get into the weeds on all this, I do not agree with either of these gentlemen and their extreme views. It may be that they are both right, but they have not as yet provided anything in the way of convincing evidence to prove their claims. Or any evidence for that matter.

Now when you look at the other prominent figures with positive UFO comments, it is clear they are watching their words and making sure they do not make statements that they cannot back up. While it’s fair to say, as Radford does, that maybe they are just being polite with their generalizations, that overlooks the obvious. They have no reason to speak positively about UFO research. They can simply dismiss such questions with polite brush offs, and that’s decidedly what they are not doing.

The real issue is obvious: Despite the positive statements from two former CIA directors, the late Rear Adm. Roscoe Hillenkoetter, the agency’s first head, and John Brennan, what they don’t say is just as important if not more so.

If the CIA has investigated UFOs and has important knowledge that remains secret, you’d think two of that agency’s heads would know where the bodies are buried. And I don’t necessary mean alien bodies. They would have access to much relevant information, and possibly evidence of alien visitation.

But neither mentioned possessing any such evidence. The best we can get is from Hillenkoetter: “It is time for the truth to be brought out.…Behind the scenes, high-ranking Air Force officials are soberly concerned about UFOs. But through official secrecy and ridicule, many citizens are led to believe the unknown flying objects are nonsense.…”

Now it’s fair to say that it’s not what he said that’s important, but what he didn’t say. It may well be that’s as far as he could go, because he was able to reveal any classified information. That would hold true for Brennan and other officials who had to have a clearance to do their work. They might know something significant, but they cannot tell without suffering the consequences.

But what about deathbed confessions, where someone reveals a truth that they couldn’t discuss without facing the consequences? We have few of those in the UFO field, usually disputed as to factual content. But none from the ex-military figures, such as Hillenkoetter, who populated the board of Major Donald Keyhoe’s UFO club, NICAP. They are all gone now, but we haven’t seen any mentions of secret evidence that survived them that would justify their ongoing interest in UFOs. No compelling sightings, no evidence of crash/retrievals, no confirmed evidence of possibly alien beings emerging or hanging around such craft.

When it comes to such political figures as John Podesta, who served in the administrations of Presidents Clinton and Obama, he has yet to reveal any meaningful UFO information. Sure, he has said positive things that indicate he believes there is a genuine mystery that cries out for a solution. But he hasn’t produced a whit of compelling evidence.

In interviews, President Clinton has said he had his people look into Area 51 and Roswell during his two terms in high office, but they came up with nothing, no evidence of alien bodies or spaceships in America’s possession.

Speaking during an appearance on Jimmy Kimmel’s TV talk show, he did concede that he wouldn’t be “surprised” if alien life existed. But he denied the U.S. government possessed such evidence.

Consider: The President is Commander-in-chief of the military and officially has access to all classified information. He does not need to possess a special “need to know” clearance, nor is there any law that would block him from revealing Above Top Secret UFO evidence. As President Trump demonstrated early in his term, he could reveal secrets without suffering consequences.

So does that mean Clinton was lying in that interview? Was he actually protecting national security in claiming he didn’t have evidence of UFO reality? Or was the secret kept from a President because the powers-that-be in that alleged “Silence Group” decided that he (or she) could not be trusted with such information?

In short, what have these former government officials, bureaucrats and military people produced that in any way helps us understand something meaningful about the UFO mystery? It’s not just a positive statement that something might be going on, but actual evidence we haven’t seen before? Not former Senator Harry Reid, once Majority Leader, who shepherded that Pentagon UFO study. Don’t forget that he wasn’t the person to first reveal those Navy “Tic-Tac” sightings.

True, Reid has said that the government does have evidence of crashes from craft of unknown origin, but a quote from him published in The New York Times about a possible “off-world” source was later corrected. There are no specifics about what those crashes involved, where and when they occurred, or what makes them unknowns.

Again, I don’t think these people would speak positively of UFOs just to be nice, or to placate a supposed UFO faction that might vote a certain way in a future election. But if they know something significant, they haven’t let us in on any of the details.

Indeed, if any of these people have guilty knowledge that we are being visited by extraterrestrials, having pledged to protect the United States of America, wouldn’t it be an act of patriotism to reveal what they know regardless of the consequences?

Privacy Policy: Your personal information is safe with us. We will positively never give out your name and/or e-mail address to anybody else, and that's a promise!

I know some of you aren’t pleased with critics, and I sometimes feel your frustration. Some are outright jerks, others seem sincere enough but are overly quick to make up solutions to a UFO sighting or other paranormal event that skirt the details.

But others are totally sincere and friendly about what they do, so you are free to disagree without getting into a flamewar. One example is a long-time skeptical writer, Benjamin Radford, who over the years worked with James Randi and other professional disbelievers. While I may not agree with Ben on a number of matters, he’s an agreeable chap and appears amenable to being shown when he is wrong ...
Click to expand...

I really like Ben Radford's approach. He's a fair minded skeptic, and IMO we need more of them. We got into some very good point-counterpoint discussion on a number of issues. Personally he's one of my favorite guests, and I hope he does really well with his new book: 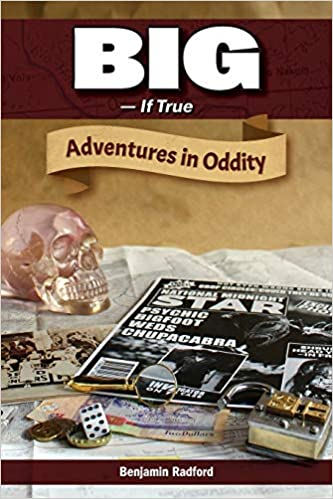