My current understanding is that Bigelow can benefit greatly both from real disclosure and from a complete hoax if he manages to persuade the US government to invest in paranormal research. So it doesn't bother me, but it doesn't not bother me.

DaveM said:
Does it bother anyone that Puthoff, Elizondo, Vallee and Knapp are either associated with or in the pay of Robert Bigelow?
Click to expand...

Bigelow has never come across as someone eager to share data that he has acquired about the UFO field. It makes me very skeptical that anything meaningful will come out of this latest UFO flap. Unless, that is, there is a payday ahead from releasing information to the public.
M

We're once again in a lull with no new key interviews in the near future. This could mean the current phase of disclosure has ended and the next step is right around the corner.

I'm now 99% convinced that TTSA has a slow disclosure calendar, and that certain people have been read into that calendar. People like George Knapp and Jeremy Corbell could have easily put out information before TTSA, but they don't seem to have full control of the decisions. I assume some kind of deal was reached, probably something like: TTSA gives Knapp and Corbell a calendar with embargo dates for different topics. In exchange, they get to provide scoops in the days leading up to major disclosure milestones, which TTSA then validates.

Here's a few things to ponder:

- The Knapp-Elizondo interview from last Thursday happened at Tom Delonge's house in California earlier in June, in the same room that TTSA board members have meetings.
- Knapp released footage in (May?) of Elizondo saying there were "3 videos," but the footage was cut from an interview that originally aired in late January, more than 1 month before March 9th, at a time where the public only knew of 2 videos.
- Knapp was aware of details of the AATIP work through BAASS as early as 2009. All of his leaks and documents are things he had in his possession long before December 16th, and which were unclassified all along.

My opinion is that Knapp was read into the plan very early on, even contributed information and data, while Corbell may have come along later.

- Jeremy Corbell released Part 1 of his Fravor interview before the bombshell Eric Davis interview. He also hurried and dropped Part 2 right before Fravor's Phenomenon Radio interview with Linda Moulton Howe on the 28th. He had been holding on to the Fravor interview material
- Jeremy Corbell released the GO FAST footage on the same day that TTSA did, except his version did not have the intro/outro/watermark, and he claimed to have obtained it elsewhere.
- Corbell had access to Knapp and worked closely with him for his Skinwalker Ranch movie. He may have used Knapp to get inside the circle of trust.

Here are topics that are remarkably absent from a lot of the controlled conversations taking place:

- The term "Flying Saucer"
- Any and all drawings of aircraft
- Aliens and recovered alien bodies
- Testimony by victims targeted, harmed or rattled by the phenomenon, and details of cattle mutilations, abductions, mind control, and other scary things aliens do
- Any other testimony involving anyone not in Fravor's group

71 years ago, the rumors of June 24th materialized on July 8th. I therefore predict that the next bombshell will be Sunday, July 8th, aka the "Roswell anniversary."
M

He seems to be suggesting that the rumors of hearings are actually a poker play. We have to understand what's happening as the citizenry telling the government "Come out with the truth, or we'll make you."

Behind the scenes, the Pentagon may continue to put up barriers instead of playing along with the TTSAAS/AATIP/BAASS disclosure plan. The outcome at this point is inevitable: the government will either offer imminent disclosure, or it'll be found guilty of lying to the bitter end, possibly increasing the chances of criminal proceedings.

The hearings may never happen at all if they're just a pressure tactic, which could explain why TTSA has been deleting social media posts...
B

All the foot stomping for disclosure will not make the PTB release classified material. When or if they choose and if doesn't cause a shitstorm around the World which might affect religious institutions and academica foundations. It very plausible they will just ignore all the request if it threatens their national security. Like Mr Snowden was just one example and it's most likely they have thousands of never seen before so called material. Mr Lazar was the door opener and his whole story never came to light. On another subject ESA 'Journey To Mercury' video looks cool BepiColombo
Last edited: Jul 2, 2018
M

I don't know why no one told me that normal humans don't celebrate the "Roswell Anniversary" on July 8th; they celebrate World UFO Day on July 2nd... I'm an idiot.

Anyway... Today, on "World UFO Day," TTSA teased the delivery of something by Elizondo to Hal Puthoff and Eric Davis:


https://twitter.com/i/web/status/1013884447920250880
Dr Eric Davis was quoted just last week, on "World Flying Saucer Day" (ugh), saying that he was just an informal technical advisor. A week later, he is now apparently helping stage photo ops while holding himself out to be doing science on behalf of TTSA with Puthoff.

Also, why is Elizondo always wearing the same outfit? It's the same as in this June 14th instagram post:

It's also the same outfit Elizondo wore in last Thursday's Knapp interview, clearly at Tom Delonge's house (the American flag room is all over Delonge's instagram).

We know Elizondo owns a wide range of colorful shirts. It's summer. It's hot. He has to change. His facial hair is always changing month-to-month, and yet the past 2 weeks of new photos/media look like they're all from the same timeframe.

The only conclusion I can reach now is that TTSA is, for some reason, lying about the time and place that picture was taken.
M

Tom Delonge apparently received an Oscar from the DoD:

Official Tom DeLonge on Instagram: “How many of you have a gift from The Office of the Secretary of Defense (DOD) for efforts in “defense of freedom” ? I have one :)…”

MrBeliever said:
Tom Delonge apparently received an Oscar from the DoD: Official Tom DeLonge on Instagram: “How many of you have a gift from The Office of the Secretary of Defense (DOD) for efforts in “defense of freedom” ? I have one :)…”
Click to expand...

Oh brother. What's next? Trump getting the peace prize? How legit is it anyway? What's it actually for?

Staff member
Not sure if this tidbit has been posted somewhere else already, but it sounds like from an interview with Debbie Ziegelmeyer of MUFON ( Missouri Chapter ), that the aluminum metal with the "unknown element" that Bigelow has was supplied by her and her brother from a 2002 dig in Roswell. June 12/18 - UFO Watch with Debbie Ziegelmeyer
M

Notice the date on the article: 2010. Smack in the middle of studying UFOs in the DIA as the director of the Advanced Aerospace Threat Identification Program.

That made my heart jump, but: "They got the idea about five years ago while crossing the Bay Bridge daily en route to their jobs at the Department of Defense."

This is confirmation that he and his associate were colleagues at the DoD as early as 2005 (Elizondo moved to the area in 2004). 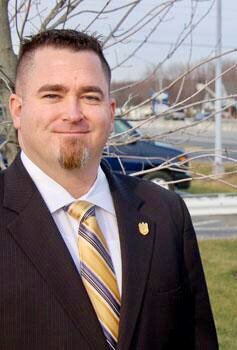 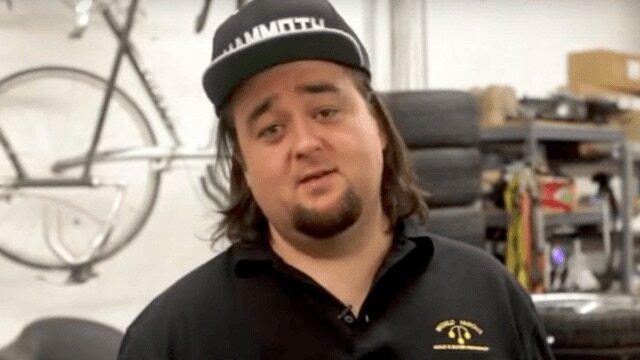 Notice the date on the article: 2010. Smack in the middle of studying UFOs in the DIA as the director of the Advanced Aerospace Threat Identification Program.

That made my heart jump, but: "They got the idea about five years ago while crossing the Bay Bridge daily en route to their jobs at the Department of Defense."

This is confirmation that he and his associate were colleagues at the DoD as early as 2005 (Elizondo moved to the area in 2004).
Click to expand...

Now more than ever am I convinced that Baba Lue Elizondo is the long lost father of Chumlee.
Last edited: Jul 8, 2018

MrBeliever said:
Listened to Eric Davis on Coast to Coast. GREAT interview. I didn't take notes though. From the top of my head, what struck me:

- The poltergeist phenomenon, which is also real, is closely associated with the UFO phenomenon. Some people are more receptive than others. "When people see one, they see more."
- There are all kinds of shapes of craft; triangles, rectangles, eggs, tic tacs, saucers, cigars, orbs...
- The US had a crash retrieval program that ended in 1989. UFOs have been recovered, but the agency in charge was apparently never successful in reverse-engineering the technology. AATIP was going to have a phase 2 that was not successfully funded but would have revived the crash retrieval program.
- Seems that the answer to "why now?" is that human science is just beginning to catch up enough that reverse-engineering might happen if enough money is thrown at the problem.
- Hal Puthoff's hypothesis is that there are ultra-terrestrials; ancient humanoids that escaped the surface and went to live underground or in space.
- It's difficult to find people who will do field work for the UFO programs because scary stuff happens and people run away from it.

This is looking more and more like an amalgamation of bad sci-fi, and yet, here we are...
Click to expand...

Yo @MrBeliever! This Redditor took some very meticulous notes of the interview. They are so thorough I actually think it’s better than an actual transcript. I copy his section about the poltergeist phenomenon discussion.

It seems unmistakable that the intent of the AATIP in Reid's letter is to secretly weaponize whatever knowledge it acquires, and nowhere is there any mention of investigation into UFOs, UAPs, aliens, or otherworldly beings.

USI Calgary said:
It seems unmistakable that the intent of the AATIP in Reid's letter is to secretly weaponize whatever knowledge it acquires, and nowhere is there any mention of investigation into UFOs, UAPs, aliens, or otherworldly beings.
Click to expand...

Snoopy DeLonge teams with Lue the Red Baron Elizondo as they deftly evade the fearsome death rays of the Nimitz Tic-Tac. Notice all the meta-materials dropping from the UAP doghouse which will later be picked up on the beach and sent to Buffalo Bob Bigelow’s BigTop in Last Vegas for conjectural analysis. To quote Snoopy: “Finally, we can justify the existence of AATIP!!! See, we’re not paranoid. They really ARE out to get us!!!” 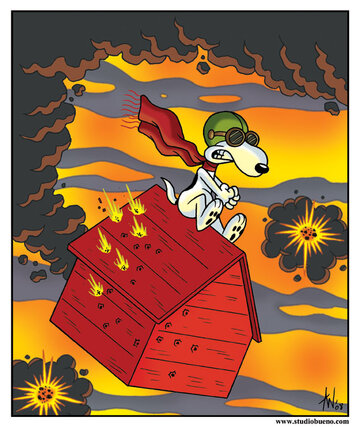 Staff member
This is semi-related, but it also appears to demonstrate that one of my least-favorite cable TV networks, Fox News, is taking the UFO mystery more seriously than other cable news networks. That's where I found the item, and when Tucker Carlson interviews someone involved in UFO investigation or reporting, such as Leslie Kean or Nick Pope, he shuts his mouth and lets them talk.

I feel like bickering today, anyone care to join me?

It beats having to pay down there at the argument clinic

.
You must log in or register to reply here.