mike said:
The big one is called Baldric 10 months old and the little guy is the Brigadier 11 weeks old. (the Brigadier is named after the Dr who character)
Click to expand...

Our occultist brother considers manifestation as a disappearance of matter and then a replacement of matter, the consideration he wants to own for a new resourcing theory.

He believes that he can de-manifest burnt matter as a manifested state, evolved from burnt light back into a non burnt condition and then re- burn it so that it remains in its manifested condition, so that he can have a cold fusion status.

This is the reason why he burnt holes in the body of Planet Earth, because his theory demonstrates it is fake....yet everyday he waits for his theory to evolve in front of his eyes, as if stone is going to replace its mass.

Therefore our brother believes that the human male Sai Baba is a review of this status.

Yet a human being is not burnt matter, we are not the spirit of wood, which is one of the elemental states he previously used in his ancient occult application. We also are not the stone......we demonstrate de-manifestation because we originally came from manifestation.

The review of data therefore states that human life as a personally owned body came after all of the other data already existed. The fact that this data exists allowed the life of Sai Baba to demonstrate de-manifestation only because all of the preceding data that supports the manifested human life existed.

victimized said:
Therefore our brother believes that the human male Sai Baba is a review of this status.
Click to expand...

Baba stated you are the soul and not the body......
But we are a body and we are not the soul.

These teachings are just a self realized concept of living, and you cannot discuss what you are not, which is what the scientist infers he is going to achieve by a condition he reviews as God.

The concept for the soul is a concept of reviewing God, yet why review God if you are a human being?

The scientist believes that he can have the power of God.

As a human who demonstrated manifestation, the condition of manifestation stated a male/female equal spirit manifested. If they did not have sex we would not be living on Earth for their manifestation died....therefore we are conceived to die to know that we do not exist....comprehend!

As a male cannot speak for a female, then his concepts relate to his own personal presence, and yet if he spoke for both bodies his concepts would differ.

victimized said:
Baba stated you are the soul and not the body......
But we are a body and we are not the soul.
Click to expand...

I am a Buddhist. There is not god, there is no soul. There is no occult wisdom, no levitating stones. There is only us at the present time, in this reality, interacting with each other.

And you, my friend, do not have the answers to the questions I ask.
V

Red said:
I am a Buddhist. There is not god, there is no soul. There is no occult wisdom, no levitating stones. There is only us at the present time, in this reality, interacting with each other.

And you, my friend, do not have the answers to the questions I ask.
Click to expand...

The review is correct, there is no levitating stones, never was, there was only the occultist who decided to try to levitate stone. To levitate stone was to try to remove it from its natural fusion and removal of the natural status of atmospheric mass to pressure to keep mass as mass. Therefore the occultist burnt the atmosphere to gain the process.

The information of the soul was simply a review after being irradiated and the circumstance cooled. Having caused atmospheric fed back scientific attack, the human mind was made aware of the condition that attacked it.

Yet when you review the Planet Earth interactive situation, it was always a mass of cold evolved gases supporting the stone mass.

The occultist scientists thought singularly to gain aspects/concepts to then apply the theory that was built by thinking and forming concepts....yet information does not exist in singularity.

Therefore the occultist thought about God, yet the mass supported the condition reviewed as God. God did not exist without the mass and the mass owned a condition it supported, which a human male named God.

The condition called a soul was a human inferred concept that the energy that equated their total existence/life determined no body, no soul. For realistically the human being does not exist. The energy a human uses is also the energy lost to them...for energy then interacts with the stone.

The only existence a human has is the fact that they are conceived by sexual procreation, yet if they allowed themselves to desist from this process, no human life actually exists.

So the atmospheric fed back advice told us our story....our 2 parents manifested, and then died. If they had no sexual intercourse no human would be living on Planet Earth.

Therefore the concept of ownership is a human male owned consideration of wanting via his presence ownership of everything else by valuing it, and giving it a value, when it never had a value.

This is the reason why spiritual information states as awareness, how can you actually value the condition of a Sun, when the Earth a stone, the Earth with a cold gaseous atmosphere is not the body of a Sun. Where do you impose the information for the actual presence of a Sun is given to you? It never was.

The male has always given value to conditions only due to the fact that he wanted conditions that he personally by self evaluation did not own. This is the reason why he destroyed his life before, by imposing values that do not actually exist.
M

Im a dyslexic agnostic, i often ponder the existance of Dog

Dog is an animal, and animals do not speak, do not consider their own presence Creator and have nothing to do with a value.

All forms of existence always existed by its own status of evolution without naming.

The only being who named everything was a human male.

The only reason why a human male gave everything a name was for the fact of the want of owning everything as a status.

When we review why he gave value, it was for the only reason he did, the want of.....the control of and the ownership of.

So obviously now the human male occultist believes his own person to be a dog, due to atmospheric feed back.

If you asked your own male mind about a condition you review as Satanic...going backwards, hearing backwards or beneath or lower than.

Animals can hear lower than a human being.

You named the value of the atmospheric fusion God, you called God a stone and God an atmospheric presence inside of a Heavenly body.

You know that dog - god is a review of a consideration of information.

You know that the ancient Shaman, the causer/reviewer/valuer for occult conversions thought himself an animal spirit.

Animal DNA has similar signals in their bodies to the human DNA....so he considered information in communication status in a drugged mind state....and all of his information was wrong.

The male has always known that occult information is wrong, for he gave it a value of evil and stated that the animal consideration belong to the causation attack of the anima...the alien/UFO condition by reviewing information that he personally did not own.

The wolf, the parent of the dog therefore was caused to mutate and produce another animal form in the healing of its own DNA condition, how dogs were formed...the same for cats and other animals.

This is why they were given a review of being the protectors of the underworld, when they are not. The information states, the human male changed the fusion of Earth's nuclear, caused above ground combustion attacks, the animal life was attacked (just as modern day observations state), the animal DNA mutated, the animal DNA then healed and mutative new genetic off shoots were produced as a review that the atmospheric condition was cooled.

Just like modern day occultist scientific review, it is known that DNA becomes mutative when irradiated and forms new genetic mutated material, that then heals in a new form, and also allows the old form to heal also. Why a wolf produced a dog.

As the review of the DNA life genesis attack was considered in the irradiation combustion incidences states the same review that a modern male considers when he reviews genetics. Therefore in the consideration of the God change, it was notated that new species was formed, why they called the new wolf species a dog.

All forms of given values, including keeping the Shroud of Turin was done so for a purpose...so that modern day evil minded occultists can no longer hide the secrecy of their attack upon the natural life.
B

i agree that all forms of existence always existed by its own status of evolution without naming.

believe said:
i agree that all forms of existence always existed by its own status of evolution without naming.

Welcome to the Paracast... I remember this thread it was a long time ago

Mike and me used to chat a heck of a lot and loved his dyslexic agnostic comment ..... but I have to award you with the thread necromancy award for the revival of this long entombed thread may it breath again. 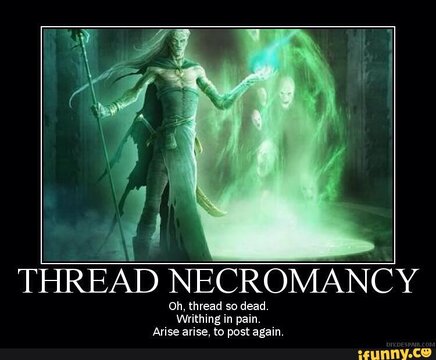