What Are You Listening To?

USI Calgary said:
Feeling a little nostalgic and decided to plate up some Starship ...

Now that is real progress,at 62 I am old enough to remember when Jefferson were a mere airplane now they are a Starship.

Staff member
I remember when I saw Supertramp play live here in Calgary
I recently ran across this version of The Logical Song on YouTube
This is not the same universe I was in on Aug 5, 1979

Staff member
Since School Will Be Back In Session Here Soon ...

Staff member
How the animated Meg was captured ...

USI Calgary said:
How the animated Meg was captured ...


To Make This Video ...
Meg Myers - Running Up That Hill [Official Video]
YES I REALIZE THAT THIS IS A KATE BUSH COVER - I STILL DIG IT

I love the original song, and I have to say I think I love Myers' cover more. Her version gives me the chills.

marduk said:
I love the original song, and I have to say I think I love Myers' cover more. Her version gives me the chills.
Click to expand...

Yes, I was thinking that she had a bit of a Kate Bush thing going, and then found her vid, so I set my preconceptions aside as much as possible and gave it an audition. Like you, I'm duly impressed.

Staff member
Van Morrison - When The Leaves Come Falling Down

It’s sad news. The late 1970s might have been a weak period for traditional rock, but Van Halen and AC/DC were two great bands that emerged. Now Eddie and Malcolm are both gone.

I still remember the first time I heard Van Halen. I was in a Pizza Hut near college in I think 1978. Over the restaurant PA they start playing Ain’t Talking’ 'Bout Love and I remember thinking, “Wow, who is that playing guitar”.

I have a friend who lives in Pasadena, California. He has told me stories of going to great parties in the 1970s where Van Halen were playing as just a local band, before their record contract, and before being famous. He said they used to play for just a keg of beer.

The Turner Classic Movies Channel recently showed the 1956 film "UFOs The True Story of Flying Saucers". This was a docudrama that took a serious look at the UFO situation in the mid 1950s.

I posted a comment on this film a few years ago. Something that strikes me every time I watch it is how almost everything in the film seems so dated - the style of the film, the music, the scripted dialog. But one thing that shines through as timeless is a UFO encounter described by American Airlines pilot Captain Willis Sperry. What Captain Sperry describes could just as well have been told by a Navy pilot last year.

On May 29, 1950 Sperry was piloting a flight from Washington D.C. to Nashville with his crew - copilot W. Gates and flight engineer R. Amholt. At about 9:30pm copilot Gates spotted a bright bluish light speeding head-on towards them. Sperry made a right turn to avoid collision. The object came to a relative stop off the plane’s left wing. As it sat there the crew described it as looking like a wingless streamlined object with a brilliant blue light in the nose. Sperry said the object then circled behind them in a matter of seconds and came to a relative stop off the plane’s right wing. After a few more seconds they watched the object shoot off at a fantastic speed to the east.

Whoever had the technology that Cmdr. Fravor witnessed in 2004 also had that technology in May 1950.

Captain Sperry’s description of the encounter starts at about 15:10

Sand said:
The Turner Classic Movies Channel recently showed the 1956 film "UFOs The True Story of Flying Saucers". This was a docudrama that took a serious look at the UFO situation in the mid 1950s ...
Click to expand...

Thanks for posting this again. These old docudramas fade from memory after a while. This stuff is Golden Era ... gold!

Same goes for the classic rock era from the late 60s thought the mid 80s. So many have fallen. A name that never made superstar status, but deserves his place in the classic guitar hall of fame was Lonesome Dave Peverett.

Staff member
Here's Another Guy Who Is Apparently ... Still Going! ... I thought he was dead! Another Mandela Effect?

Staff member
Trivia Alert!​
Golden Earring celebrated their 50th anniversary in 2011. On October 10, 2011, at the Historical Museum of The Hague, PostNL presented the first postage stamp with music. This stamp was issued in honour of the 50th anniversary of the band. When a smartphone with a special app is held up to the music stamp, Golden Earring's "Radar Love" plays ... You can get the app here: Met de PostNL-app heb je alles in de hand 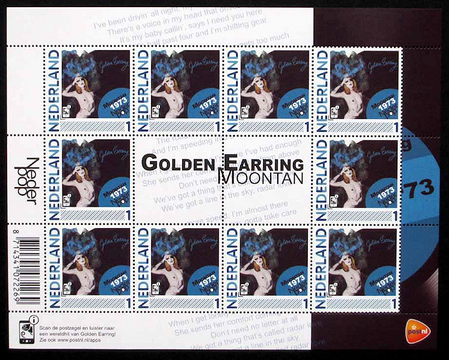 Love that one! And now you tell me they're Canadian too? My head just exploded! We just heard them on something we watched on TV too. Maybe SOA. Don't remember. "The Dead South is a folk-bluegrass musical ensemble based in Regina, Saskatchewan, Canada." That is Awesome !

I was just spacing out riding the patterns on this radically not bluegrass number ...