Hi everyone there is one story or legend that has always fascinated me "The Lambton worm" I am doing a bit of "armchair" research into the subject because I feel there is more too the story.
So if anyone has suggestions on good internet sites or books to read on the subject please post them here.I would be very gratefull.
All the best Harry

I never heard of it but a quick search indicates it is an old english fairy tale.

The Lambton worm: Fact, Fiction or both?

There are many different versions of the Lambton legend, but in all versions there are persistant characters and places:
(1) Lord Lambton
(2) The worm
(3) The Location (river Wear)

There are many possible reasons that the story has survived, but my personal feeling is that the legend or story has been embelished and remoulded over the years, but some of the events it describes are at the very least possible and may infact be based on a real event.

My opinion is that it was not a dragon(wyrm) it was actually a Lamprey of gargantuan proportions, the reason for my thinking this is that in many versions of the story the
description of the worm says "and had nine holes along each side of its mouth" The German word for lamprey is "Neunauge" or nine eyes. this is due to the fact that the Lamprey has on each side of its head seven circular external gill slits an eye and the nostril. making nine holes or eyes.

So are there or were there Lampreys in the river wear?
Categorically yes there were and they have actually started to return due to massive improvements in water quality.**

Also it is important to note where the Lambton Estate is located, it is less than ten miles from the North sea. 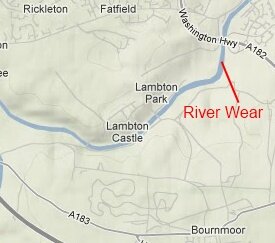 My theory is that a massive Lamprey of a probably now extinct species swam up the river Wear from the North Sea and was caught, spawning the legend and people have added their own ideas and events to make it a "better story".
There are "modern" cases of Creatures being found where they should not supposedly be.
two examples are:
(1) Matawan Creek shark attacks 1916
(2) The discovery of Greenland Sharks in the St Lawrence River

Can I get a better map of this place? I do not want to go swimming there.