This photo of a four-year-old girl, taken last year on a beach in Zushi, Japan, has people asking what is that is behind her? — Reddit

A mysterious photo of a little girl that appears to have captured the image of someone standing behind her – even though her father said there was no one else there - is making the rounds of the Internet this week.

Submit
At first glance of the above photo, taken last year in Zushi, Kanagawa prefecture, Japan, you might not notice what appears to be a pair of boots on the ground behind the girl’s legs and a piece of a blue shirt sticking out below her left elbow.

But here is the close-up of the footwear.

Martin Springall, the girl’s father, said he took the photo with a cell phone last July. He insists it was not manipulated in any way.

"I took a few pictures, and when I was looking through them at night, I noticed what appeared to be a pair of boots behind her in one of the photos," he told ABC News. "I took several of her in the same spot, but only one had the boots."

He said he “freaked out” and showed it to a friend who posted it -- of course -- on the ghost section, or subreddit, of the website Reddit.

In poured the theories. Some said the Samurai-style footwear belonged to the ghost of a warrior who must’ve wandered over from a nearby graveyard.

Another person pointed out that General Douglas MacArthur had his WWll headquarters in Zushi and said the classic dungarees and blue cotton shirt in the photo call to mind a U.S. Navy Uniform from the era.


Other people drew comparisons to similarly strange photos, such as the 1964 "Solway Firth Spaceman" photograph and a 1972 picture of an “uninvited wedding guest,” which seemed to show an extra leg behind one of the men in the photo.

Naturally, many commentators simply said someone walked behind the girl, and the dad didn’t notice.

Here are the rest of the photos in the series. Cue the “Twilight Zone” music.

Weird enough for you?

Springhall said there was no way that someone walked behind his daughter as he would’ve noticed and besides, he said, she is very shy and would not have posed if someone was nearby.

"She thinks it's a ghost, but not a scary ghost -- a nice one," Springall said.

And while you are at it – Is this cat going up or down?

Is this cat going up or down?

It is walking down the stairs.
N

This photo of a four-year-old girl, taken last year on a beach in Zushi, Japan, has people asking what is that is behind her? — Reddit
Click to expand...

(a tsunami is ready, but the level of force is lacking, maybe we can make up the difference in the next few days ... less then a year ago, if the thought of this was even mentioned, it would of been done within a few days ... this should be already done)

The minute I saw the close-up photo I thought construction worker jika-tabi! I lived in Japan for a couple of years and fell in love with the footwear of construction workers...crazy, I know, but they were jika-tabi - traditional split toed shoes. Some workers wear the super traditional ones that are more like canvas socks ( I have a pair of them - had to go to a constructions worker supply store to get them - that was an experience!) while others wear ones that either have the split toe hidden inside or have steel enforced toes like the pic below. Also, construction workers tuck their pants in the boots, just like in the photo - it's pretty clear there are pants tucked into the shoes. This is certainly not a samurai, but likely a construction worker. I can't explain how he got into the photo...but, it's not a ghostly samurai. 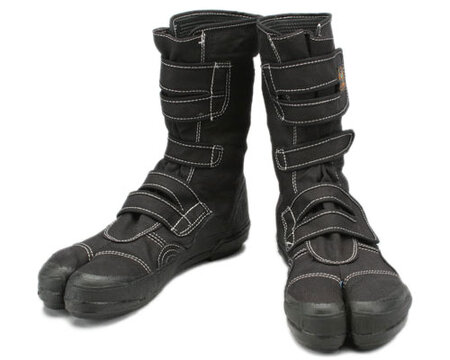 Staff member
Wow! I missed this when first posted but I'm glad I stumbled onto it. At first I thought it was probably just a rock formation behind the girl, giving the illusion at first of a pair of boots. But looking at the close-up I am sold on it being a pair of feet in some kind of footwear - whether old or new I can't say. The fact you can also see some legs and also the piece of blue material at the girl's left side - there was something there behind her and it wasn't part of the normal background there. The other pics strongly indicate something was captured on a single image and if we take the photographer at his word - there was no-one else behind the girl at the time.

We'll no doubt never know the truth of this but it certainly is an interesting little mystery. Thanks for posting Oaken.

In the first photograph there's someone by the waters edge wearing white.In the last photo that person has disappeared.Is that another ghost!!.I doubt it but it shows we don't always notice everything around us.I suspect the person immediately behind the child that wasn't noticed at the time walked down behind the child out of view before the next photograph was taken.You can see the ground slopes away behind her.
C

Hmm. My guess that an actual person stood momentarily behind the little girl, though given the size of the boots it seems we ought to see the head of this person, at least partially, above the head of the child. ??
C

It is walking down the stairs.
Click to expand...

I think you're right, Han. But I had to look a few times before seeing it that way. Cute cat.

Constance said:
I think you're right, Han. But I had to look a few times before seeing it that way. Cute cat.
Click to expand...

Hi Constance, I think that the "tread"* of the stairs is a good indicator, because it would be a tripping hazard if it was the other way around.

N.B. the lip of the tread overhangs the riser

Thanks for that illustration. It never occurred to me to notice the extension of the treads of the stairs. Having that piece of information stabilizes my (and likely anyone's) perception of the image. Did you read the linked material? Fascinating.

Furious Internet debate: Is this cat going up or down stairs?
You must log in or register to reply here.