On the Show — David Marler 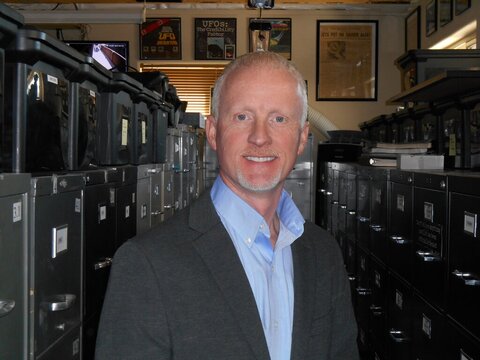 David Marler has had a lifelong interest in the UFO subject and has actively investigated and researched the subject for 32 years. He joined The Mutual UFO Network (MUFON) in 1990 as a Field Investigator Trainee. Since then, he has served as Field Investigator, State Section Director, as well as Illinois State Director.

During his tenure with MUFON, he had conducted numerous investigations into alleged UFO sightings and related experiences. He has discussed the subject of UFOs on numerous radio and television news programs over the years. He has also lectured on the subject to numerous school and adult audiences including at the university level.

David has one of the largest personal libraries of UFO books, journals, magazines, newspapers, microfilms, audio recordings, and case files from around the world that covers the last 75+ years. With this he has been examining the detailed history of UFO sighting reports and related patterns.

Evidence of his historical research is his acclaimed book, Triangular UFOs: An Estimate of the Situation. Here, he has provided a comprehensive analysis of triangular UFOs. He has collected, collated, and analyzed hundreds of reports. In the process, he has created a detailed profile of these objects and written a rich narrative of their history.

In November of 2020, he became the recipient of the world’s single-largest historical collection of UFO case files in the world. These files include the historic NICAP and CUFOS case files in addition to Dr. Hynek’s original Project Blue Book files. Due to his role as curator for these files and his track record of credible historical research, he was offered the rare invitation of serving as a full Board Member with Dr. J. Allen Hynek’s Center for UFO Studies (or CUFOS). David willing accepted this invitation and now serves in the role as their official Archivist.

David received his Bachelor of Science degree in Psychology from Southern Illinois University at Edwardsville (SIUE). He received his Certification in Hypnotherapy from Mottin and Johnson Institute of Hypnosis in St. Louis, Missouri.

Recording Date (including After The Paracast)
Wed. February 16 at 5 PM Mountain (6 PM Central)
Post your questions or comments for discussion below:

What happened to Ralph?

I don't have one Curt.