Staff member
Short of reading 162 pages with extensive graphs, give me a summary of the points that you find most significant.

Staff member
And this is not true then?

Gene Steinberg said:
Short of reading 162 pages with extensive graphs, give me a summary of the points that you find most significant.
Click to expand...

I already did it four years ago.

Staff member
Link? Remember that you are making the claim here, thus you need to be specific about your arguments and summarize where appropriate. Honestly, I do not have endless amounts of spare time to read all this documentation, and do all the other stuff I have to do. Point me to more targets please.
F

The UFO Partisan: Roswell, D-Day And The Titanium Industry

Staff member
I read that article and I wasn't impressed. That's how this all started. I thought it was a case of stretch this and stretch that.
F

Gene Steinberg said:
I read that article and I wasn't impressed. That's how this all started. I thought it was a case of stretch this and stretch that.
Click to expand...

Staff member
OK, I read the Bragalia piece, which ended up at 26 pages when I did a printout using Apple's "Reader" feature.

It is written in a typically sensationalist National Enquirer style, where a little means a lot. So he takes second-hand sources who heard things, combines them with a few first-hand interviews, and uses lots of implications and such words as "could" and "may" to embellish his theory.

The theory is that nickel titanium, or nitinol, the so-called memory metal, was invented using reverse-engineered Roswell technology, or at least heavily influenced by the recovered wreckage.

That may be true, of course. But we're still in the mode of manipulating the information to fit a theory. Bragalia did discover that some of the figures involved in the nitinol development were evidently involved with Project Blue Book. It may just be that Blue Book recruited scientists to consult in the event they did actually capture a UFO. Remember that they had astronomers on board too, such as a certain Dr. J. Allen Hynek.

There are also statements, again often second hand, of the possible recovery of materials from a crashed UFO, though Roswell isn't necessarily linked.

Certainly, if I wanted to make the case for the theory of nitinol being somehow related to the recovery of Roswell wreckage, this would be one way to do it. But there's too much theorizing and too much of an attempt to make little things mean a lot to make this theory credible.

A better way to evaluate this information would be to remove Roswell or crashed saucer wreckage from the equation and see what the facts point to, and whether they could possibly indicate anything more than some smart inventors working in part under military secrecy making significant contributions to metallurgy. The big question is, absent a crashed spaceship from another world, could we have developed nitinol? From the information presented, it appears the answer is yes.

Once again, you also have to wonder why ET would be using 20th century technology in constructing spacecraft that may be capable of star travel? If they are hundreds or thousands of years ahead of us, wouldn't they have developed more advanced hull materials?

Now to be fair, I suppose the memory metal might have been actually recovered from a crashed UFO, only we didn't have a clue as to how it was fashioned. So we did the best we could with existing materials and technology. Maybe.

Gene Steinberg said:
Once again, you also have to wonder why ET would be using 20th century technology in constructing spacecraft that may be capable of star travel? If they are hundreds or thousands of years ahead of us, wouldn't they have developed more advanced hull materials?
Click to expand...

According to the ufolore, the hull was of an unknown material that couldn't be dented or burnt and was so hard that it took several diamond tipped bits to penetrate. So that answers that question ( sort of ). The other thing to consider is that there are only so many elements in the universe to work with, and what gives a material its properties isn't dependent on its elemental composition alone, but also on the combination and organization of those elements. Graphene is made of a very common element but is harder than diamonds and has very high-tech applications:

So simply because an alleged UFO sample is made of common elements isn't sufficient reason to think it isn't genuine. We should look closely at the way it's been fabricated, all the way down to the atomic level. Of course, given that graphene is a human invention, and it's a material only one atom thick, how can we be sure any material submitted as alien isn't actually made by us? We also need to establish a verifiable chain of custody all the way back to its origin.
Last edited: Aug 14, 2014

A clip of fake document used in the first episode of Hangar 1 has resurfaced in another film.
I've tried to gather the evidence and crush this, before it becomes yet another barnacle on ufology.
Blue Blurry Lines: Hangar 1, MUFON and Mandate 0463 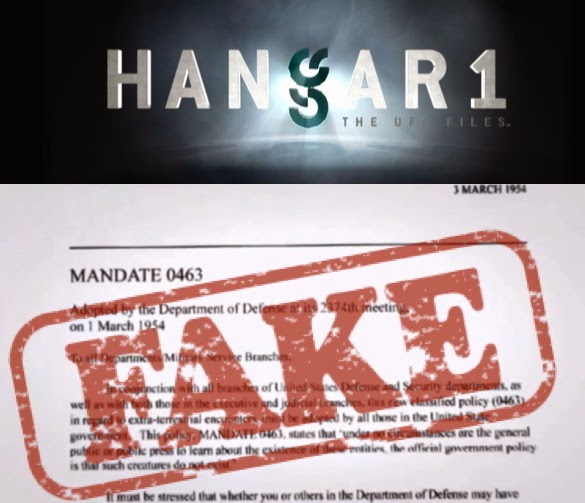 The History Channel has raised Hangar 1's profile. They have moved it from H2 to the main channel.

I'd forgotten about the impact of the change of channel, and will be interested to hear reviews from new viewers.
Supposedly millions more potential viewers!

The debut episode was in the same formula as last season, but they've changed up the cast a bit.
There's one new thing; the stories now each have fictional case file numbers.

The critics of ufology don't even have to go after programs like Hangar 1. The History Channel has done all the heavy lifting themselves promoting dreck like this.
G

You all know of course there is going to be drama related in programs like hangar 1 ufo files. Who cares if there is really a "Hangar 1", The point that a lot of you are missing is there is a lot of very reliable evidence that they present. You
have to make your own decisions, of course on the evidence. That show uses a lot of phrases like alleged, possible, "If that is true" etc. Come on a lot of you here on these post sound like you are working for the US Government trying to say anything to debunk, debunk and point out every little inaccurate statement. Actually most of you on here need to be far MORE REALISTIC. Sorry for being repetitive

Sentry said:
I'd forgotten about the impact of the change of channel, and will be interested to hear reviews from new viewers.
Supposedly millions more potential viewers!

The debut episode was in the same formula as last season, but they've changed up the cast a bit.
There's one new thing; the stories now each have fictional case file numbers.
Click to expand...

You know that for a fact, where did you get your information? Every story has some inaccurate info, Hangar 1 has a lot of verifiable evidence presented. Wake up all of you, Quit being so unrealistic and think everything is debunkable
G

Sheeesh, this site seems to be critical in the extreme, wow I want the truth also, but a lot of you are not going to find any truth by being closed minded and ultra critical, Lighten up!!!
G

DaveM said:
I would trust Daffy Duck with giving me the UFO truth before I would trust MUFON...
Click to expand...

Wake up, Your not listening!!
G

You don't listen to well

Sentry said:
Your comparison is a but faulty but you have a point. The Paracast does promote some BS just by covering on the show, but it's not generally presented as anything but the guest's claims, and usually challenging questions are asked. The TV shows seldom provide any sort of balance, they just state the material as fact and support it with dramatic re-enactments of things that may have never happened.

Some of the TV shows open with a disclaimer stating that the material is speculative and ask the viewer to decide for himself. Instead of a disclaimer, "Hangar 1" opens with statements proclaiming the program is based on actual MUFON case files that they have investigated. That is false. Worse, they present stories from discredited sources, support them with phony graphics of newspapers and government documents, and have a professional actor playing the role of a UFO researcher to "sincerely" describe whatever case is in the script.

MUFON is starring in a reality TV show with very little reality in it. It could be worse, but it couldn't be much worse.
Click to expand...

You don't listen to well, You have your critical agenda and close your mind. Of course at least some of the information presented on hangar 1 is speculative, and what if true, etc, Drama to make the show more interesting. That does not make the whole show BS, Come on what show or some type of info is not debunkable, debateable? Opinions vary

DaveM said:
The critics of ufology don't even have to go after programs like Hangar 1. The History Channel has done all the heavy lifting themselves promoting dreck like this.
Click to expand...

When you are in the middle of a modern myth being born it's reasonable to concede that there will be many tall tales of the Reptilian one that got away. Those edges of the myth will be mainstreamed and popularized through the common channels of the day. Television is just the worst of it and YouTube only exacerbates the problem.

I remember once I was complaining to a tv reporter concerning a labour protest march and would they be sure to represent a specific position, I wanted to know. The reporter quickly said, "Listen, this is television. This segment will be about two minutes. We don't have time to deal with all the facts. Why don't you go talk to the newspaper reporters?"

Few have any real grasp on much that's tangible outside of speculation concerning the phenomenon. Even fewer re$ources flow in that direction. But I wonder what the overall impact is of prolonged mainstream myth making? Increasingly the idea of the UFO as alien visitor is an accepted reality. In a mimetic age meaning makers can generate viral belief structures in pockets or across the globe Gangnam Style.

Does this increased popularity then result in an approach to UFO investigation that increasingly makes it more and more acceptable? Or does its weird factor always keep it out of reach because it's out of understanding when you look at all the surrounding high strange features of the phenomenon?
Share:
Facebook Twitter Reddit Pinterest Tumblr WhatsApp Email Share Link
Top