Ghost in the Woods

I saw this online today. Anyone think she captured a dead soldier on camera?

A mother has captured a clear picture of a ghost soldier in a family snap she took on the outskirts of Derry this week.

Gerri Moran (34) captured he image of the eerie ghost soldier while on a walk along a disused railway line, which runs adjacent to the River Foyle, near the Derry/Donegal border.

Gerri took a photograph with her mobile phone camera of her young son and daughter running through a wooded area between the Brandywell and Carrigans areas. When she got home and went through the snaps, she noticed a very spooky face looking back at her.

"After our walk I was looking through all the photos I had taken and noticed a kind of shadow or disturbance in front of my son Finn," says Gerri.

"When I looked closer I couldn’t believe what I saw, it looked like a man - to me it looked like a soldier - standing there beside the tree. None of us saw anything when we were walking past the tree, there was nothing there to see. The kids didn’t notice anything and weren’t afraid or anything. It really freaked me out when I saw it at home on my phone.

"The kids want to head back out there again this week for a walk."

Well look who found his way out of the portal...welcome back.

Was there any evidence of any encampment there in the past?
B

It looks a bit like US civil war servicemen old photo is it Photoshop?

Wade said:
Was there any evidence of any encampment there in the past?
Click to expand...

Derry historian Ken McCormack says the area that the ghostly figure was captured was, at one stage, heaving with British military as it was near the border and could, in fact be the spirit of a very famous poet who frequented the area before WWI.

"To me this figure looks like an officer," he said. "He has the look of a British soldier about him. Not far from where the spirit was captured is Government House, where Lord Dunsany would have lived.

A close friend of his, the famous poet, Francis Ledwige would have stayed with him often and wrote many poems about the beauty of the area. He felt at home there. He was killed after a mine blew up beside him during fighting in Belgium in 1917. He was just 29-years-old. He was an officer, it was said that his heart was very much in this countryside outside Derry, it could very well be him.

"There would also have been military activity on this border from the 1920s, as this was the old GNR railway line from Derry to Donegal that passed over the border. I do know that there was at least one shooting there in that area in that era and also an American serviceman took his life there after a very tangled love affair. It is an area that was affected badly by the Troubles.

"This is a very clear picture and it looks like the soldier is looking straight at the camera. It is absolutely fascinating and intriguing to see such a clear picture."

Gerri said she didn’t doctor or change the image in any way, and would not have the skills to do so even if she had wanted to.

blowfish said:
It looks a bit like US civil war servicemen old photo is it Photoshop?
Click to expand... 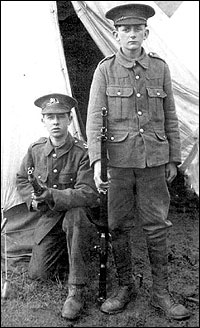 No don't think so and look at the hat which looks much earlier date.
Last edited: Apr 18, 2016
You must log in or register to reply here.