Cynthia Hart-Button will be this week's guest

Staff member
Cynthia Hart-Button has been a spiritual, business, and personal consultant for over 40 years. She is founder and president of the Sacred World Peace Church & Alliance, and the White Bison Association. Cynthia and her husband Charles are the caretakers of the herd of white bison in Ukiah, CA. I've known both Cynthia and Charles Button for over ten years.

She has worked on ranches all over the world and with many different animals- lions, tigers, bears, one eagle, wolves, horses, longhorn cows, and many more. She feels that the white bison is the most misunderstood, majestic, and powerful animal she has ever worked with.

She was a tour guide at the Grand Canyon, Sedona, and Hava Supai Falls and has spent years studying and learning from many nature teachers in the ways of Spiritual life. Cynthia learned from her father and mother, and her grandmother was a medicine woman who traveled with Zane Grey.

She attended college at Cleveland State, Alaska University, Georgetown University, Lily Dale Spiritual Center and the Church of Light and Contact Healing as an apprentice to Dr. Fred Houston

She has been recognized for her intuitive knowing and psychic abilities, Though her seminars, workshops, lectures, and private personal and business consultations, she shares he knowledge of metaphysical truths and spiritual insights. Cynthia has been honored with being one of the top ten psychic's in the country and has been featured nationally in numerous magazines and newspapers .

We will be discussing her psychic gifts, the White Buffalo and their place in Lakota tradition and addressing Native American prophesy in general. Please post your QUESTIONS only here. We will be taping tomorrow, December 20, @ 11 PT

Staff member
QUESTION: What are some of the similarities and differences between beliefs about White Bison in North America and the beliefs about sacred cattle in eastern religions?

My Old Man used to call me, 'Dumbass.' He was probably often right, lol.

We will be discussing her psychic gifts, the White Buffalo and their place in Lakota tradition and addressing Native American prophesy in general. Please post your QUESTIONS only here. We will be taping tomorrow, December 20, @ 11 PT
Click to expand...

The Lakota have some interesting stuff in their Traditions, often overlooked in favor of the New Ager En-Vogue Hopi/Pueblo stuff. This is time 3 or 4 to log in to specifically tell the forum software to stop sending me emails, but, apparently, it's has wax in its ears. How appropriate for me to click on this thread. I have questions. Ready?

Cynthia, aside from the Jesus stuff, including Jesus visiting your Dean of Students and one of your Priests in your Church you started, telling her to paint a picture of him, you seem to be trying to do some sort of Animal-Spiritualism/Shamastic thing, too. Can you speak to your understanding of White Animals in general, aside from the Bison? Further, can you elaborate upon your understanding of the difference between New Ager Faux-Shamanism and the Real Deal Stuff? I know amongst certain Native Americans, teh term White Shamans is used to describe these New Agers dressing up in Indian Garb, calling themselves Little Walking Deer or Raven Two Feathers, beating tom-toms in a teepee on a weekend retreat. If this group of people from your website went to the Pine Ridge Reservation, current home of some Oglala Lakota, and you asked to meet the Elder Spiritual Leaders, to, umm, chat about that Gnosis stuff, and then showed them the 'White Buffalo Medicine Blanket' so expensive ($250) that only rich middle aged white ladies could afford for decorating their several hundred thousand dollar houses that sit where those Buffalo used to Roam, that this group would be in jeopardy of being labeled as New Ager White Shamans, and subsequently not be taken seriously concerning Spiritual Matters by those actual Native American Spiritual Elders?: 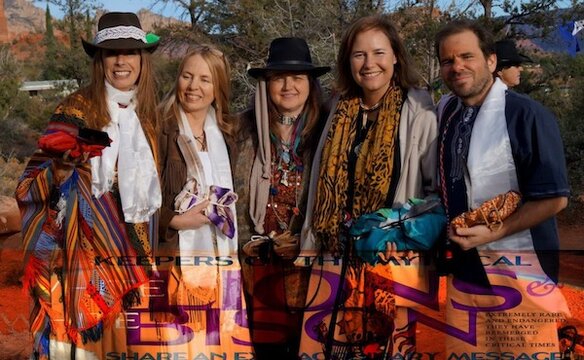 The herd is set to gain some new notoriety. Pendleton Woolen Mills is making Navajo-style "medicine blankets" using wool and blended white buffalo hair that the bison have shed.

Further, when it comes to White Animals, can you speak about your understanding about the difference between actively looking for and collecting 'novelty' captive animals that are fenced in and somewhat domesticated and that thing I call the Force of Good up there in The Universe deciding it was time for you to cross paths with a White Animal, like this: 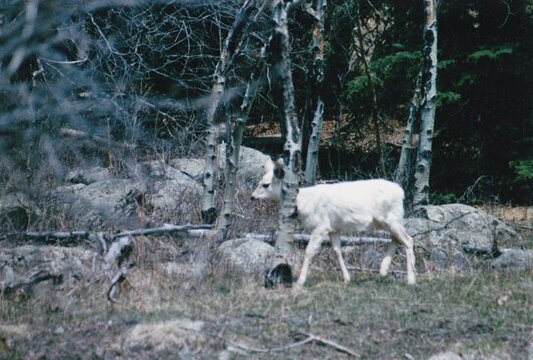 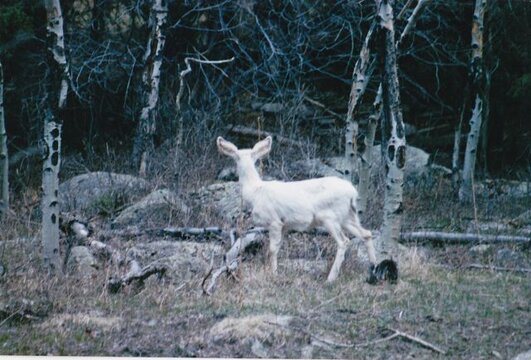 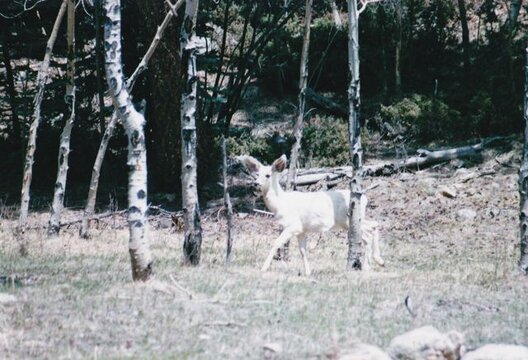 The difference between contrived Encounters with White Animals and Real Ones is ?...?

Related to your 'spirit name', can you speak about your understanding concerning what it is that actually makes a Shaman, well, a Shaman? Does one's Father decide that for you or does The Universe? My Dad called me dumbass a lot, yet, on that same mountain you see that White Deer on, every year, for several years, I Crossed Paths with at least one bear. No pictures, though, for when 10' feet from a bear in the woods, my only thoughts are, "Holy Crap! ANOTHER Bear. Hope this ain't the one that decides to start kicking my ass ..." Chris can confirm a Colorado Native is lucky to see one mountain lion, let alone 5 in 10 years. Or to have staring contests with Lynx in broad daylight from 15' away. Just you staring at that Lynx and the Lynx sitting on the ground, staring back, until I finally backed off at let him go. A truly Powerful Experience. All kinds of stuff like that with me. Do you know the difference, in a Spiritual Sense as you most definitely try to attach meaning to concerning animals, between hunting down, collecting, and keeping captive and fenced in a 'special' animal with a 'message' versus having to look the hell out, with no intention of finding it, for said 'special' animal, 'cause you are afraid it might start kicking your ass? I do ...

Since that actual word that everyone commonly uses today, Shaman, is from the Asian Steppes, the Western part a place from which I have ancestors, and there are definite parallels to some Native American traditions, can you speak to what you know about the connections between the Shamanistic Type Traditions of groups like the Lakota and the Tengrist type beliefs from the Steppes, like with this dude, a Strawberry Blonde Redheaded Shaman, like me, from the Asian Steppes (He has some pretty sweet animal tattoos)?: 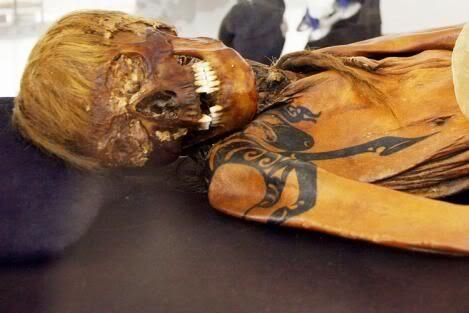 Concerning your Church, is that really the best that Jesus dude can do? "Hey middleaged New Ager Lady living a spoiled life in the richest country in the world, well, unless you were born on an Indian Reservation, I'm Jesus and I picked YOU to visit out all the rest of the 7 billion people. Pretty cool, eh? Lucky you. I must have something really, really special for you to do, huh? I do. I want you to paint a picture of me. How awesome is that? What an awesome job I gave you. Get paintin' ... See ya ..." Apparently, while visiting one of your Priests, I guess she's actually more important and Holy than a Priest and is a Bishop, lol, in your Church you made up out of thin air, Jesus didn't open his damn eyes and take a look around, for it is a very, very effed up world, Spiritually, in 2016, else he would have stuck around and actually done something productive to fix it, not commission paintings from New Agers calling themselves Bishops and Priests. A lot of Bad Stuff out there that needs to be Dealt With, Cynthia. But, since you are a psychic and proclaim yourself a Messenger, I am sure you are as aware of that as I am. Lol. All kinds 'o talk about that dude for about 800 years now, not 2,000, and he doesn't seem all that powerful or special to me. Last thing this Shaman is is impressed with all of that ...

I'll stop there, lol, but all ya'll started it by continuing to send me emails after I have told the software to stop, lol ...