Staff member
I have to thank Curt for introducing us to Sarah, and I was really honored to have Curt sit in as a guest panelist.

By the way, Curt also appeared on this weekend's edition of After The Paracast, where he probed into that failed deal between Robert Bigelow and MUFON to investigate UFO sightings.

Don't forget that After The Paracast is an exclusive feature of The Paracast+, our subscription service.

For more details on signing up, please visit:

Gene, it was a pleasure to be able to join the discussion. Sarah may have felt she was being cross-examined at times, but she was great and her responses were genuine.

When Sarah discussed her first book on Jill Tarter, it reminded me of something. I half-remembered seeing something about an awkward encounter between Tarter and aerospace billionaire Robert Bigelow ( a long-time UFO figure tied to the AATIP story). After the show, I tracked it down, and now we have a he said, and a she said.

Bigelow’s version was in 2008 on George Knapp's show:

George Knapp: "The Americans, as you know, those guys don’t want to have anything to do with UFOs.”

Robert Bigelow: “I can vouch for that. I was sitting at an AIAA conference last year and Jill Tarter was sitting on my right, and I started to bring up the topic of UFOs. I thought she was going to throw up on my lap. It abruptly shut off like that and she was not receptive at all to discussing it. So, that is the signature of the kind of power; the kind of intimidation again, that this, blankets the whole community with. That’s unfortunate because if we could collectively take it seriously and go after this, and look; take what we see with our own eyes and pursue this; and say my god these things are real. How do they do it?”

When the Times article appeared in December, astronomer Jill Tarter thought to herself: “Here we go again.” Co-founder of the SETI Institute, Tarter has spent her career searching for signs of life beyond Earth, and over the years she has repeatedly encountered the same names — people who believe we’ve been visited by aliens. Tarter is not so convinced.

The Times article cited Bigelow and Puthoff, whose interest in the paranormal is no secret. Tarter says Bigelow once pitched SETI on a project to investigate alien sightings and offered to fund it.

“It’s hard to walk away from money,” Tarter says, but Bigelow “was so very convinced that we have been visited, and I couldn’t find it credible, and he didn’t offer any evidence.”

Getting back to Sarah, I've since finished her new book, and I agree with Randall, it's excellent.

Journalist Sarah Scoles’ normal beat is “the intersection of science, space, tech, and culture,” and in her new book, she puts ufology under the microscope. Here’s a candid review of They Are Already Here: UFO Culture and Why We See Saucers from Curt Collins at The Saucers That Time Forgot.
UFO Culture Examined: They Are Already Here by Sarah Scoles 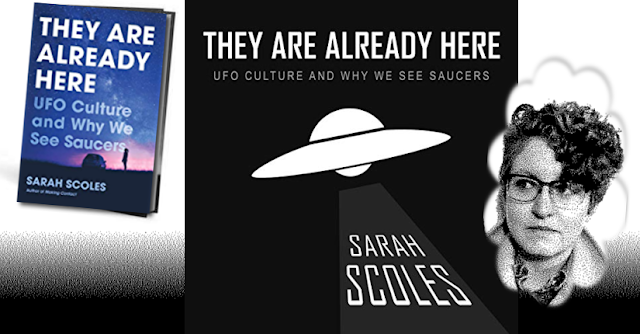